Total Outdoor Adventures offers a unique hunt for British Columbia Shiras Moose.  The moose population, as is the case with all species, is carefully managed throughout British Columbia and is home to some of the largest Rocky Mountain Shiras Bulls found anywhere averaging 700lbs to 1000lbs.  Our area consistently produces 40” to 50” bulls with 55” plus bulls a real possibility.

The bull river drainage is known locally as the best tag to acquire for resident hunters however residents have to wait upwards of 20 years to the draw this tag. The reason why this is such a coveted tag to get is two reasons. Firstly most of the good moose habitat is in road closures, allowing moose to reach full trophy size and a stable population. Secondly, a recent forest fire has made exceptional amounts of new growth grasses and alder patches which the moose thrive in.

The archery season begins in September and offers bow hunters the chance to hunt these bulls during the peak of the rut in early October. If you haven’t experienced hunting moose during the rut then you are in for a thrilling experience as bulls become very aggressive responding to calls and seemingly fearless. The rifle season begins in mid October when moose are at the tail end of the rut and has proven to be equally as exciting.  In past seasons we have enjoyed a very high success rate in our area with 75% on archery hunts and 90% on rifle hunts.

These large ungulates typically habituate marshy valley bottoms but have also been located at high elevations as well.  Horses are always ready and available to take you into remote drainages accessed only by horseback or foot for a more challenging hunt. Hunter’s should be prepared for both methods of hunting depending on weather conditions.  We recommend you book this popular hunt well in advance of your targeted hunting season as tags are very limited. 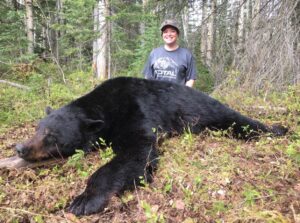 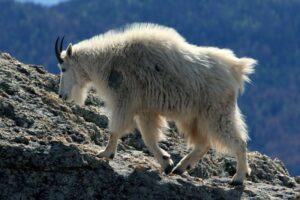